If you are familiar with the work of playwright Arthur Miller, you will not want to miss Sierra Rep’s latest production, “All My Sons.”  If you do not know Miller, you have a perfect opportunity to sample the work of one of the greatest writers America has produced.  When you leave the theater after this show, you will realize that you have been touched by something deep in the human spirit. You will have understood the way we grapple with tough choices that strain our personal integrity.

It is 1947, and we meet the Keller family in a lushly green Midwestern backyard.  A phenomenally realistic set immediately draws us in --- the homey bungalow seen from the rear, a wide back porch, a swing under a tree, a rose-covered trellis, stone-encircled flower beds, and tree branches that extend from the wings, lit in a way that gives depth and dimension to every scene.  When the lights first go down, we hear a strong wind, and when they come back up, a sapling has been broken in two. 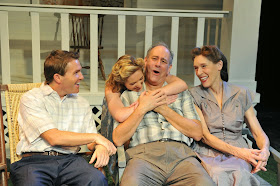 
This young apple tree was planted about nine months ago to commemorate Larry, the son who was a fighter pilot and was lost during the war. Larry’s presence is strong in the play for a character who never appears.  His older brother Chris, played beautifully by Michael Hampton, also went to war but returned, and seems to cover up his pain with good humor and optimism.  Not only did he survive his brother but also most of the men in the company that he led. Now he wants to get together with his brother’s fiancée Ann, played by Alyson Lindsay, and has invited her for a visit.

Thus begins the conflict.  Kate, the mother who lost her son, cannot face that he is truly dead. Maybe he is just missing, she says, and we must await his return. She is looking for proof through his horoscope and the memorial tree having been destroyed.  Of course, Larry’s fiancée must wait as well, according to Kate.  Jessica Powell is fabulous as Kate, and we can feel her tortured soul as we see it in her body and on her face. In fact, it seems possible that she is conflicted with something more than Larry’s death.

Joe Keller, her husband, is a man who rolls with the punches and “jollies” everyone from the neighborhood kids, the doc next door, his wife and even Ann, who besides being Larry’s fiancée and former neighbor, is the daughter of Joe’s former business partner from whom Ann is estranged.  LA actor John Combs shows us Joe as a self-made man of the self-congratulatory type, who finds meaning in family and has a strong instinct for survival.  As the play develops, Joe becomes more and more manipulative of various situations, and Combs subtly shows a growing anxiety in Joe.
Although Chris has a lot of the glad-handing manner of his father, he also seems more idealistic and probably better educated, perhaps a product of a more affluent childhood than the one his father had.  He seems to accept that he will take over his father’s company and fortune without being fully committed to it, and in an argument with his father over Ann, he complains about always having to pull back so that other people won’t suffer. Yet he seems ashamed of what is  practical, equating it with selfishness, and he admires the selflessness of the men in his company who died.

Actress Alyson Lindsay rises to the challenge of playing Ann, who is often the catalyst for truth in the play but who also wants to be a peacemaker. Ann’s brother George, played brilliantly by Nick Ferrucci, appears in Act II and roams the stage like a caged tiger, filled with the tension of his search for the truth.

Supporting players Corbin Kerr, a little boy in cowboy attire, and Breton Nicholson and Stephanie Tucker as Mr. and Mrs. Lubey help flesh out the Keller’s neighborhood and lighten the mood.  Michael Ludlum and Olga O’Farrell as Dr. and Mrs. Bayliss add texture and drama with their strong personalities.  Dr. Bayliss has one of my favorite lines: “It’s hard to remember the kind of man I wanted to be.”  O’Farrell as his wife reveals her frustration with her husband and the Kellers’ influence, which gives us the idea that there are secrets in the Keller family that are perhaps not as secret as they think.

“All My Sons” was Miller’s second play to go to Broadway.  When his first one closed after only four performances, he determined to give up writing if this one were not more successful.  Thankfully, it was.  Miller won the Tony for this play in 1947.

Miller garnered inspiration from a 1940’s newspaper story about an Ohio company selling defective aircraft parts to the U.S. Air Force.  As in today’s scandals such as the “mortgage meltdown,” the question of “Who’s to blame?” is front and center.  That question seems hard for the culprits to answer since they see themselves driven by love of family or what they consider smart business practices. How big is our family?  In the play, Chris tells his mom,  “There’s a universe of people outside and you’re responsible to it.” It reminds me of the Biblical Cain who asks, “Am I my brother’s keeper?”

Kudos to Sierra Rep for bringing us thought-provoking drama.  Director Scott Viets and producing and managing directors, Dennis and Sara Jones deserve our thanks for tackling this gem of the American theater.